Foggia welcomes Venezia in a game from the 14th round

Foggia welcomes Venezia in a game from the 14th round of the Italian Serie B. Let’s take a look at this clash in our vip football predictions for today. 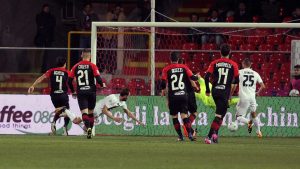 Foggia are in a pretty bad position since the beginning of the season. They are 18th in the league right now, being positioned in the relegation zone. So far Foggia have just 8 points won and a record of 4 wins, 4 draws and 4 defeats from 12 games played. But they are aware that a win over Venezia would allow them to escape the relegation zone and improve their position in the league.

In their last five games Foggia lost once and made four consecutive draws, including against Spezia in the previous round. That game ended with a 0-0 draw. Before this, Foggia also made a draw, sharing the points with Brescia with 2-2 draw at home.

Venezia on the other hand are doing a little bit better at the moment, being 13th in the Serie B standings with 15 points. Right now they have a record of 4 wins, 3 draws and 5 losses.

In their last five games Venezia won three times, made one draw and suffered one defeat. In the last fixture they enjoyed a 2-1 win at home against Brescia. The big hero of the match was Francesco Di Mariano, who scored a brace for Walter Zenga’s team. Alfredo Donnarumma returned a goal for Brescia, but it was too late for the visiting side to fight for something more in the match.

These are our vip football predictions for the Serie B clash between Foggia and Venezia on Monday night. Venezia are in a better position in the league, but don’t forget that Foggia have the advantage to play at home here. It won’t be easy for the visiting side.