Real Sociedad hosts Deportivo Alaves in a game from the 17th round of the Spanish La Liga. Let’s discuss this game at the Anoeta in our predictions football 1×2 for today. 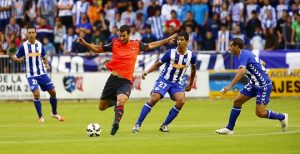 Real Sociedad are currently 15th in the league standings with 19 points won, having a mediocre performance so far. The Basques have a record of 5 wins, 4 draws and 7 losses, which does not allow them to enjoy a better position in the table. In their last five games La Real won twice, but also suffered three consecutive defeats in their last three games, losing against Real Betis, Real Valladolid and Getafe.

In their last fixture Real Sociedad visited the Colisuem Alfonso Perez, but suffered a 0-1 defeat against Getafe. Jorge Molina scored the only goal in the game, putting the ball behind Moya’s back after just 3 minutes of playing.

In the summer Real Sociedad made a managerial change, letting Eusebio go and replacing him with Asier Garitano, but so far this decision is not providing the result everyone hoped for.

Deportivo Alaves on the other hand are currently 6th in the standings with 25 points, doing better than their next opponent. Right now Alaves have a record 7 wins, 4 draws and 5 defeats. They were in the Top 3 of the league, but in their last four games they won just 2 points, which made them lose some positions in the table.

In their previous game Alaves made a 0-0 draw against Athletic Bilbao at home. For them this was a 4th consecutive game without a win. Can we see Abelardo’s team improving its performance in their next game?

These are our predictions football 1×2 for the match between Real Sociedad and Deportivo Alaves at the Anoeta on Friday night. We wish you good luck!