Werder Bremen hosts Fortuna Dusseldorf in a game from the 14th round of the German Bundesliga. Let’s give you a look at this clash at the Weserstadion in Bremen in our vip soccer bets. 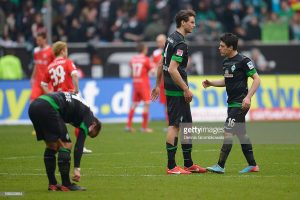 Werder are 9th in the Bundesliga standings with 18 points won so far and a record of 5 wins, 3 draws and 5 defeats – a perfectly balanced numbers so far. In their last five matches Werder are doing really bad – four losses and just one draw against Freiburg. At this moment they are the team in the worst form in the whole Bundesliga.

In their last fixture Werder suffered a 1-2 loss at home against the champion Bayern Munich. Yuya Osako scored in Manuel Neuer’s net, but Werder’s ex-player Serge Gnabry decided everything with a brace for Bayern.

Soon or later this negative run for Werder shall stop, but can it happen in their next match?

Fortuna Dusseldorf are doing even worse at the moment. Right now Fortuna are at the bottom of the standings, being 18th in the Bundesliga with 9 points won. Their record so far shows 2 wins, 3 draws and 8 defeats. They are a team which shall improve, if they want to remain in the top division for the next season as well.

In their previous fixture Fortuna Dusseldorf suffered a 0-1 loss at home against Mainz 05. The only goal in the game was scored in the 67th minute, when Jean Mateta put the ball behind Michael Rensing’s back.

These are our vip soccer bets for the Bundesliga clash from the 14th round between Werder Bremen and Fortuna Dusseldorf. If you look at the standings, you can point out Werder as the favourite here. But keep it in mind that right now the team from Bremen is in a really awful form.