Playing for the first place in Group A, Atletico Madrid visits Club Brugge in a match from the Champions League on Tuesday night. Let’s take a look at this clash on Belgian soil in our vip football predictions today. 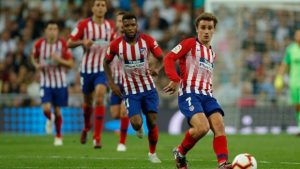 Right now Atletico Madrid are leading Group A of the competition with 12 points, having 2 points advantage in front of the 2nd Borussia Dortmund. Given the fact that most likely Dortmund will beat Monaco in the other game from the group, Atletico need to win against Brugge in order to win the group.

The Spanish side is almost perfect in the group so far. Yes – they suffered a very heavy defeat against Borussia Dortmund at the Signal Iduna Park, but they won all of the other four games in the group. Last season Atletico didn’t qualify for the 1/8-finals of the Champions League, so you can be sure that now they are extra motivated to do better.

In their previous game in the group Cholo Simeone’s boys didn’t face any problems against Monaco, beating the French side with 2-0 at the Wanda Metropolitano. Koke and Antoine Griezmann scored for Los Rojiblancos.

For Club Brugge this year’s participation in the Champions League is pretty good. The Belgian side will finish third in this group, qualifying for Europa League. So far Club Brugge have won 5 points in this group. They have a record of one win, two draws and two defeats. In their last game Brugge made a prestigious 0-0 draw during the visit to Borussia Dortmund on German soil.

When these two teams met in October at the Wanda Metropolitano, Atletico Madrid enjoyed a 3-1 win. Antoine Griezmann scored a brace for the Spanish side, while Koke also scored for the home side. Brugge’s only goal in the game was scored by Arnaut Groeneveld.

These are our vip football predictions today for the Champions League clash between Club Brugge and Atletico Madrid. Good luck!