Free sure soccer tips for today

Two former world champions face each other on Thursday at the Mercedez-Benz-Arena in the city of Stuttgart. Germany will host Spain in a game from Group 4 in League A of the UEFA Nations League. Let’s preview it in these free sure soccer tips for today. 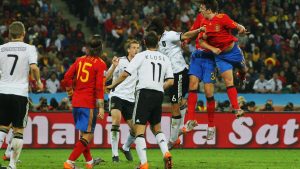 Despite of Spain being a very worthy opponent, Germany’s manager Joachim Low decided to rest some of the players who participated in the Champions League late rounds. Figures such as Joshua Kimmich, Leon Goretzka, Serge Gnabry and Julian Draxler were not called for the next two matches against La Roja and Switzerland. It was a wise decision from Low.

The German fans will look with huge interest at Borussia M’gladbach’s midfielder Florian Neuhaus. The 23-years old player was called for a first time for the national team, so he could make his official debut for Die Mannschaft. He’s a very talented player, so we expect to see him doing good.

Spain are motivated to win the Nations League for a first time, but they are aware it won’t be easy against Germany and Ukraine in the next two matches. Unlike Low, Luis Enrique called Bayern Munich’s Thiago for these two games. He was instrumental for Bayern Munich’s success in the Champions League, but he didn’t get more rest than usual.

Spain’s bad news come from the condition of the talented striker Mikel Oyarzabal. Real Sociedad’s ace was diagnosed with COVID-19, so he won’t be playing. He was replaced in the squad by Villarreal’s striker Gerard Moreno.

These are our free sure soccer tips for the Nations League derby match between Germany and Spain on Thursday. These two teams are arguably among the best in the tournament, so it’d be curious to see their first steps for the new season. Germany’s advantage to play at home won’t be that big. As we know, there won’t be any fans at the stands because of coronavirus.