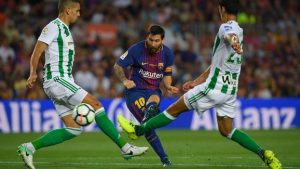 The leader in La Liga Barcelona hosts Real Betis in a game from the 12th round of the Spanish La Liga. There are our vip football predictions for this clash at the legendary Camp Nou in the Catalan capital.

Barca are leading La Liga with 24 points and a record of 7 wins, 3 draws and 1 loss. Ernesto Valverde’s team had a tough period of few consecutive games with negative results, but now Barca are enjoying a run of three consecutive wins in the league – against Sevilla, Real Madrid and Rayo Vallecano.

In the previous round of the league Barca visited Rayo Vallecano and it got surprisingly difficult for them to win. The Catalans needed two goals from Luis Suarez and one from Ousmane Dembele in order to win the game. Just minutes before the end of the game Rayo had an advantage in the game, but in the dying minutes of the match Los Cules managed to turn the game around.

Real Betis on the other hand are 15th in La Liga with 13 points won so far. The Andalusians are probably not really that happy with their position in the standings right now. Last season Betis were doing very well and even qualified for the European competitions. But now they are having some difficulties.

Barcelona expect to have Lionel Messi back in action against Betis. The Argentine genius had a hand injury in the last few weeks, but now he’s ready to return on the pitch.

These are our vip football predictions for the La Liga clash between Barcelona and Real Betis. Good luck!