Burton Albion welcomes Manchester City in a second leg from the 1/2-finals of the Carabao Cup. This game is going to be played at the Pirelli Stadium on Wednesday night. Let’s take a look in our vip soccer predictions today. 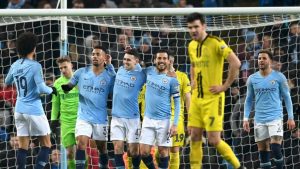 This game looks absolutely meaningless right now after what happened in the first leg. Maybe you remember that Manchester City achieved a shocking 9-0 win at the Etihad. It was a pure nightmare for Burton Albion and they’d want to forget this fixture as soon as possible. We shall wonder how they have reached the 1/2-finals of the competition, if they are really this bad.

The first game was a pure spectacle for Manchester City’s fans. The manager Pep Guardiola put a strong team on the pitch and this was the result. The Brazilian international Gabriel Jesus scored four goals in Bradley Collins’ net, while Kevin De Bruyne, Oleksandar Zinchenko, Phil Foden, Kyle Walker and Riyad Mahrez also scored for the current holder of the trophy.

Now it’d be interesting to see how Manchester City will appoach the second leg after such a result in the first game. You can bet that Josep Guardiola will give a proper rest to his key players. There’s just no need to put any of his stars on the pitch in a game like this. Many of the backup & young players of the club will recieve a chance to impress the manager. Just few days later Man City have a game against Burnley in the Premier League, so they’d want to be as fresh as possible.

As for Burton Albion, this is a chance for them to save some of their pride after what’s happened at the Etihad.

These are our vip soccer predictions today for the Carabao Cup fixture between Burton Albion and Manchester City.