Caen hosts Lille in a match from the 20th round of the French Ligue 1. Stay with us, because we are about to examine this clash at the Stade Michel d’Ornano in our vip soccer bets. 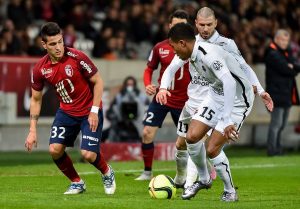 Caen are currently 16th in the Ligue 1 standings with 18 points won so far and a record of 3 wins, 9 draws and 7 losses. In their last five matches Fabien Mercadal’s boys are doing pretty average – one win, three draws and one defeat. Their only goal in these five games came against Tououse at home.

In the previous round Caen shared the points with Reims for a 2-2 draw at the Stade Auguste-Delaune II. Casimir Ninga and Enzo Crivelli scored for Caen, but their goals were not enough for the visitors to claim the win.

At this moment Caen are just 2 points ahead of the 18th Dijon and the relegation playoff zone in France, so they can’t be calm at any point right now.

It’s completely different situation for Lille, of course. The Dogs are 2nd in the Ligue 1, being only behind the champion and convincing leader PSG. Right now Lille have 34 points and a record of 10 wins, 4 draws and 5 defeats. In their last five fixtures Lille won twice, made two draws and suffered one defeat against Toulouse.

It was really a surprising loss at home against Toulouse for Lille. The Dogs suffered a 1-2 defeat at the Stade Pierre-Mauroy. Rafael Leao opened the score for Lille, but Toulouse clinched the win with two goals from Mark Gradel.

These are our vip soccer bets for the Ligue 1 fixture between Caen and Lille on Friday night. We believe that Lille are favourites for the win. They would want to bounce back after their loss against Toulouse in the previous round.