Chelsea welcomes Wolverhampton Wanderers in a game from the 30th round

We are heading our attention to the Stamford Bridge in London, where Chelsea welcomes Wolverhampton Wanderers in a game from the 30th round of the Premier League. Let’s discuss it in our football bets for today. 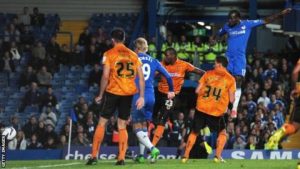 Chelsea’s main goal until the end of the season remains finishing in the Top 4 and returning to the Champions League for the next season. At this moment the Blues are 6th in the league with 56 points, trailing on two points behind the 4th Manchester United. But they also have a game less than the Red Devils and the 5th Arsenal.

So far in the league Chelsea have a record of 17 wins, 5 draws and 6 losses. In their last five games Maurizio Sarri’s boys won three times, but also suffered two losses. In their last game the Londoners celebrated a 2-1 win during the visit to Fulham at the Craven Cottage. Gonzalo Higuain and Jorginho scored for the visitors.

During the week Chelsea had a game in Europa League as well. Sarri’s team didn’t leave any chances to Dynamo Kyiv in London, beating the Ukrainian team with 3-0.

Wolverhampton are doing well in the Premier League this season. The Wolves are currently 7th in the league with 43 points and a record of 12 wins, 7 draws and 10 defeats. In their last five games Nuno Santo’s boys won twice, made two draws and suffered one loss.

Wolves’ last game against Cardiff City ended with a 2-0 win at the Molineux. Diogo Jota opened the score for the home side, while Raul Jimenez made it 2-0. It was a pretty comfortable win for Wolverhampton.

These are our football bets for the Premier League fixture between Chelsea and Wolverhampton Wanderers at the Stamford Bridge. Good luck!