Getafe hosts Valencia in a match from the 12th round of the Spanish La Liga. Let’s take a look at this clash at the Coliseum Alfonso Perez in our vip soccer predictions today. 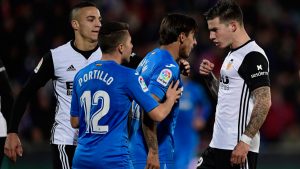 Getafe are 8th in La Liga with 16 points won and a record of 4 wins, 4 draws and 3 defeats. For them being in the middle of the standings is pretty good at the moment. As long as Getafe are away from the relegation zone in the league, that’s good for them.

In their last five games Getafe lost just once against Levante. They also enjoyed two wins and made two draws. In their last game Getafe made a 1-1 draw during the visit to Huesca. Jose Bordalas’ team was pretty close to lose this once, but Jorge Molina equalized for the visiting team in the injury time of the game.

Meanwhile Valencia are not having a good season so far. Los Che are 15th in the standings with 11 points won so far and a record of just 1 win, 8 draws and 2 defeats since the beginning of the campaign. Obviously Valencia’s biggest problem at the moment is the fact that the club is doing a lot of draws in its games – more than they should allow.

In their last game in La Liga Valencia suffered their second loss for the season, getting beaten with 0-1 at home against Girona. The only goal in the game was scored soon after the halftime break, when Pere Pons scored for Eusebio Sacristan’s team. It was another big dissapointment for Los Che since the beginning of the season.

These are our vip soccer predictions today for the La Liga clash between Getafe and Valencia. The visiting team had a game in the Champions League during the week, which could be a factor here.