Huddersfield Town hosts Brighton & Hove Albion in a game from the 14th round of the English Premier League. These are our vip soccer bets for this clash. 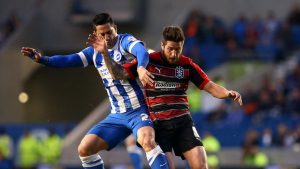 Huddersfield Town are 16th in the league standings with 10 points won so far and a record of 2 wins, 4 draws and 7 losses. In their last three games Huddersfield maanged to escape from the relegation zone, thanks to two wins and one draw, achieved versus Fulham, West Ham and Wolverhampton Wanderers. This is also showing us that right now they are in a pretty good shape.

In their last game Huddersfield achieved a 2-0 win away from against Wolverhampton Wanderers. The big hero of the day for David Wagner’s team was the Australian Aaron Mooy, who scored a brace for the winning team. The performance Huddersfield showed in their last three games is giving the team a hope that maybe they will get away from the relegation zone for good.

Brighton & Hove Albion on the other hand are currently 12th in the Premier League with 15 points won and a record of 4 wins, 3 draws and 6 defeats. In their previous five matches Brighton & Hove won twice, but also lost twice and made one draw.

In their last game Brighton & Hove Albion won a point during a 1-1 draw with Leicester City at home. Glenn Murray opened the score for the home side, but Jamie Vardy equalized for Leicester via a penalty kick.

These are our vip soccer bets for the Premier League match between Huddersfield Town and Brighton & Hove Albion from the 14th round of the English league. If we talk about a team being in a fine form lately, surely this is Huddersfield Town. Maybe they are entering this match as a slight favourite, but keep in mind that Brighton & Hove have the home ground advantage.