Leicester City welcomes Watford in a match from the 14th round of the English Premier League. These are our vip soccer predictions today for this clash at the King Power Stadium in Leicester. 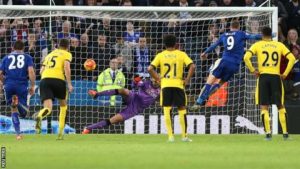 Leicester City are moving in the middle of the table. Right now the Foxes are 10th in the standings with 18 points and a record of 5 wins, 3 draws and 5 losses. In their last five games Claude Puel’s boys won just once – against Cardiff City, made three draws and suffered one defeat.

In their last game Leicester made a 1-1 draw during the visit to Brighton & Hove Albion. Glenn Murray opened the score for the home team, but Jamie Vardy saved Leicester with a well taken penalty kick just 11 minutes before the end of the game.

Being at this position is pretty good for Leicester. They are aware that they do not have the potential to be among the strongest teams in the country right now, so being in the middle of the table after 13 games played is excellent.

Watford are just one position above Leicester in the standings, being 9th with 20 points won. Their record so far shows 6 wins, 2 draws and 5 defeats. In their last five matches Watford won twice, but also suffered two losses and made one draw.

In their last game Watford suffered a 0-3 defeat at home against Liverpool. Javi Gracia’s team was completely outplayed by the Reds, who took the win with goals from Mohamed Salah, Trent Alexander-Arnold and Roberto Firmino.

These are our vip soccer predictions today for the Premier League game between Leicester City and Watford from the 14th round. These two teams are very close to each other in the standings, so it’s difficult to say which one is a favourite. But Leicester have the advantage to play at home, of course.