Let’s take a trip to the beautiful Veltins Arena in Gelsenkirchen, where Schalke 04 are hosting Lokomotiv Moscow in a match from Group D of the Champions League. These are our vip soccer predictions today for this clash. 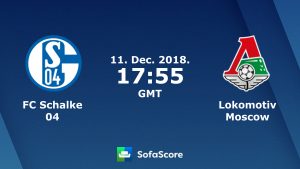 For the Germans team this game do not hold any real meaning, because Schalke will know that whatever happens, they will finish second in this group. Right now the Royal Blues have 8 points won in five games, which is completely enough for them to reach the 1/8-finals of the tournament.

This is in a contrast with the way Schalke are performing in the Bundesliga, where Domenico Tedesco’s team have some serious problems. But surely the fans will be very happy to see their team at the 1/8-finals of Europe’s best competition.

In their previous game the Royal Blues suffered their first defeat in the Champions League for thise season. Schalke visited Porto at the Do Dragao and suffered a 1-3 defeat. Nabil Bentaleb’s goal from a penalty kick was not enough for something more in the game.

Lokomotiv Moscow on the other hand are playing for the 3rd place in the group. Right now the Russians are 4th in the standings with 3 points, but being just one point behind the 3rd Galatasaray. This means that if they win at Veltins Arena, Lokomotiv will have a chance to beat the Turkish club for the 2nd place. Of course, they must hope that Galatasaray won’t beat Porto in the other game in the group.

In their previous game in this group, Lokomotiv achieved their first win, beating Galatasaray with 2-0 in the Russian capital.

These are our vip soccer predictions today for the Champions League clash between Schalke 04 and Lokomotiv Moscow. We wish you good luck!