Schalke 04 welcomes Borussia M’gladbach in a game from the 20th round of the Bundesliga. Let’s take a look at this fixture in our vip soccer predictions for today. 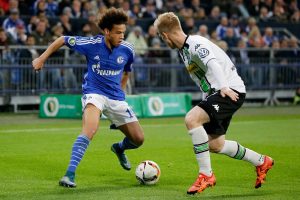 Schalke 04 are 12th in the Bundesliga with 22 points won so far and a record of 6 wins, 4 draws and 9 defeats. The Royal Blues finished 2nd last season, but now everything looks different for them. They are much worse than they were an year before and that’s the reason for their average position in the league.

In their last five games Schalke won twice, made two draws and suffered only one defeat against Bayer Leverkusen at the Veltins Arena. Since that, Schalke are unbeaten in their last three matches.

In their last game Schalke made a 2-2 draw with Hertha BSC away from home. Konoplyanka and Uth gave Schalke advantage in the result on two occasions, but Hertha managed to save a point. It was dissapointing for the visitors to miss the win here.

Borussia M’gladbach are doing much better so far. They are 3rd in the league with 39 points, fighting for a Champions League qualification. So far M’gladbach have a record of 12 wins, 3 draws and 4 defeats. In their last five games they won three times, made one draw and suffered one loss.

In their last game Borussia M’gladbach enjoyed a 2-0 win against Augsburg at home. Both goals were scored in the last 15 minutes of the game, when Ozcar  Wendt and Patrick Herrmann put the ball behind Gregor Kobel’s back. It was a late boom by M’gladbach, but soon or later, they did the job and won.

These are our vip soccer predictions for the Bundesliga clash between Schalke 04 and Borussia M’gladbach at the Feltins Arena. Have a good luck!