Sevilla faces Lazio in a second leg from the Europa League

It’s going to be hot at the Ramon Sanchez Pizjuan on Wednesday night, because Sevilla faces Lazio in a second leg from the Europa League 1/16-finals. Let’s take a look at this game in our vip soccer bets for today. 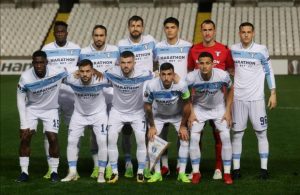 This is arguably the most interesting tie from the 1/16-finals of the competition. The first game at the Stadio Olimpico ended happily for Sevilla, because the Spanish side won the game with 1-0. The only goal in the game was scored in the first half, when the French striker Wissam Ben Yedder put the ball in the net after an assist from Pablo Sarabia. Until the end of the game Lazio tried to fight back, but Pablo Machin’s boys defended well and kept their precious lead.

This result gives Sevilla an advantage, of course, but it’s still not deciding the tie. It’s just one goal and Lazio have a good enough squad to score at least once at the Sanchez Pizjuan. The tie is still very open at this moment.

Sevilla won at the Olimpico, but the team is not in a good shape at the moment. Machin’s boys won just one of their last five games in La Liga, losing three of them. Sevilla are still 4th in the standings, but Los Rojiblancos could lose their place in the Top 4 if they don’t improve their form.

Meanwhile Lazio are currently 7th in the Serie A standings, but still having a realistic chance for a Top 4 finish. In their last game the Eagles suffered a defeat during the visit to Genoa, which left them on 4 points behind the 4th Milan.

These are our vip soccer bets for the Europa League fixture between Sevilla and Lazio on Wednesday night. We wish you good luck!