AFC Bournemouth hosts Huddersfield Town in a match from the 15th round of the English Premier League. Let’s take a look at this game in our vip soccer bets for today. 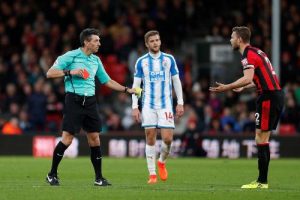 Bournemouth are having a solid season so far, being 9th in the league standings with 20 points won so far. Eddie Howe’s team have a record of 6 wins, 2 draws and 6 losses since the beginning of the campaign, currently being just 2 points behind the 6th Everton. For Bournemouth the most important thing is to be away from the relegation zone and so far they are doing a pretty good job.

In their last five games Bournemouth won once, but in their last four matches they suffered four consecutive defeats. In their last game Howe’s boys were beaten by the champion Manchester City, suffering a 1-3 loss at the Etihad Stadium. Callum Wilson scored the team’s only goal in Ederson’s net, but the champions did their job pretty well on that day.

Huddersfield Town on the other hand are 17th in the Premier League standings with 10 points and a record of 2 wins, 4 draws and 8 defeats. Right now Huddersfield are just one point above the 18th Southampton and the relegation zone of the league, so they really need some points at the moment.

In their last five games Huddersfield Town won twice, lost twice and made one draw. In their last game David Wagner’s boys suffered a 1-2 loss at home against Brighton & Hove Albion. Mathias Jorgensen opened the score for Huddersfield in the 1st minute, but the visiting team clinched the win with goals from Shane Duffy and Florin Andone. Huddersfield played an hour with a man less on the pitch after Steve Mounie’s red card.

These are our vip soccer bets for the Premier League game between Bournemouth and Huddersfield Town. Good luck!