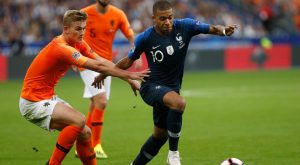 It’s time once again for the UEFA Nations League – the newest competition on international level in Europe. Today we are going to examine the game between Netherlands and France, which is going to get played in Rotterdam on Friday night. Here are our vip soccer bets for this clash on Dutch soil.

Let’s start with the world champion France. Les Bleus are continuing to do very well, currently leading this group with 7 points won from 3 games played. The French team is in the company of strong sides as Netherlands and Germany, but this is not stopping Didier Deschamps’ team to be as strong as it was during the World Cup in Russia.

The one to blame for this is Deschamps. The French managed could have made some experiments with his squad during the Nations League, but he did totally the opposite – he picked every time almost the same team he used to pick during the World Cup. This is a prove that Deschamps want to do well in this competition and he’s not underrestimating the Nations League.

France started the competition with a draw against Germany away from home, but in the next two games Les Bleus triumphed in Paris over Netherlands and Germany. For the world champion this game is a great opportunity to win the group and qualify for the semi-finals of the competition.

Netherlands on the other hand are 3rd in this group with just 1 point won. The pefrormance of the team so far was truly dissapointing, so the manager Joachim Low have a lot of questions to answer.

Germany won a point in the first match against France, but in the next two the Mannschaft suffered two consecutive defeats – against Netherlands and France, conceding 5 goals in these two games.

That’s our preview for the Nations League clash between Netherlands and France in Rotterdam. We wish you a good luck in our vip soccer bets for today!