Bologna faces Crotone in a match from the 4th round of the Coppa Italia. Let’s see what’s the situation with these two teams in our vip soccer predictions today. 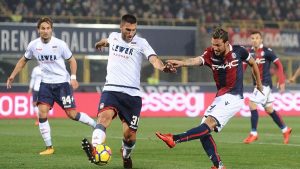 Bologna are not doing very well in the Serie A at the moment, being 18th in the standings with just 11 points won. Their record in the Italian league shows a pretty average performance so far – 2 wins, 5 draws and 7 defeats. In their last five matches in the Serie A the Rossoblu are without a win – three draws and two losses, including against Sampdoria in the previous round.

Bologna reached the 4th round of the Coppa Italia after a 2-0 win against Calcio Padova in the previous round. Blerim Dzemaili from a penalty kick and Mitchel Dijks scored for Bologna, securing their team the win in the match.

Crotone on the other hand are currently 15th in the Serie B, not having a very good campaign so far. At this moment Crotone have a record of 3 wins, 3 draws and 8 defeats in the second tier of Italian football. In their last five games Crotone are pretty awful – one draw and four defeats.

Crotone reached the 4th round of the Coppa Italia after a 1-0 win over Livorno away from home. The only goal in the game was scored by Marcus Rohden after an hour of play at the Stadio Armando Picchi.

These are our vip soccer predictions today for the Coppa Italia match between Bologna and Crotone from the 4th round of the competition. As we have a clash between a Serie A and a Serie B team here, it’s only normal to think that Bologna are the big favourite. But have it in mind that Bologna are currently concentrated on their fight for survival in the Calcio, so be careful with this one.