It’s time for Champions League football once again. And that’s pretty good news. Today in our vip soccer bets we will take a look at the game between Galatasaray and Porto from Group D of the competition. 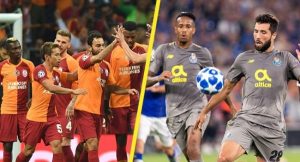 This game has some meaning only for the home side here. Galatasaray are fighting for the 3rd place in the group and the opportunity to join Europa League. They don’t have any chances to progress to the 1/8-finals of the Champions League, because they are 4 points behind the 2nd Schalke 04. But in same time they are just one point ahead of the 4th Lokomotiv Moscow, so they must defend this position.

Fatih Terim’s boys started their participation in the group with a win against Lokomotiv Moscow at home, but in their next four games they won just one point. Clearly Galatasaray were not good enough to reach the 1/8-finals of the Champions League, but a win against Porto will guarantee them that they will continue in Europa League.

Porto on the other hand do not have anything to play for here, except for their own prestigie. The Dragons already won this group and they will finish first in it. So far Porto are unbeaten in the group, having a very good record of four wins and one draw.

It won’t be surprising if Porto’s manager Sergio Conceicao make some changes for the next game, giving some break to his most important players. Of course, this gives Galatasaray a better opportunity to win, because the Turkish side will put its best team on the pitch.

In their previous meeting, Porto won against Galatasaray with 1-0 in October, thanks to a goal from Moussa Marega.

These are our vip soccer bets for the Champions League clash between Porto and Galatasaray at the Estadio Do Dragao. Good luck!