Toulouse welcomes Olympique Lyonnais in a fixture from the 20th round of the French Ligue 1. Allow us to take a look at this fixture at the Stadium de Toulouse in our vip soccer predictions today. 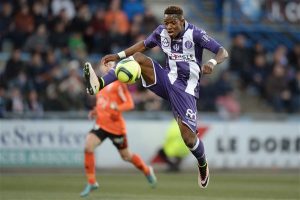 Toulouse are having an average season in Ligue 1 so far. At this moment they are 14th in the league standings with 21 points won and a record of 5 wins, 6 draws and 8 losses. In their last five games Toulouse won twice, lost twice and made one draw. At this moment they are just 4 points above the 18th Dijon and the relegation playoff spot, so we can say that they can’t be too calm about their current situation in the league.

In their previous fixture Toulouse suffered a 1-2 defeat at home against Strasbourg. Ludovic Ajorque opened the score for the visitors, but Yaya Sanogo equalized for Toulouse via a penalty kick. The visitors took the win with a goal after the halftime, when Ibrahima Sissoko put the ball behind Baptiste Reynet’s back.

Olympique Lyonnais are doing much better, of course. Right now Les Gones are 3rd in the standings with 33 points, being on 4 points behind the 2nd Lille. At this moment Lyonnais have a record of 9 wins, 6 draws and 4 losses.

In their last five games Olympique Lyonnais managed to win just once – against Monaco, which tells us that they are not in their best shape at the moment. In their previous game Les Gones shared the points with Reims for a 1-1 draw at home. Pablo Chavarria opened the score for the visitors, but Bruno Genesio’s boys equalized with a goal from Bertrand Traore 20 minutes before the end.

These are our vip soccer predictions today for the Ligue 1 clash between Toulouse and Olympique Lyonnais.