Who will win Group E of the Champions League

Who will win Group E of the Champions League, finishing first in the standings? We will know the answer of this question after the game between Ajax and Bayern Munich on Wednesday night. Let’s examine this clash in Amsterdam in our winning soccer predictions for today. 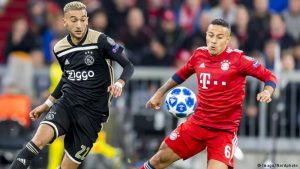 Right now Bayern Munich are leading this group with 13 points, being 2 points ahead of Ajax. In other words, Ajax’s only chance to win the group is to beat Bayern. It won’t be easy, but at least the Dutch team will have the support of the stands, playing at home.

Ajax already qualified for the 1/8-finals of the competition, which is the most important thing for them. But now they will try to win the group as well. When these two teams met in Munich, the game at the Allianz Arena ended with a 1-1 draw. Mats Hummels opened the score for Bayern, but Ajax equalized with a goal from Noussair Mazraoui.

Bayern are aware that even a draw in Amsterdam will guarantee them the first place. But make no mistake here – Bayern never plays for a draw. The Bavarians will try to win, because this is their DNA – to win every game.

In the Bundesliga Niko Kovac’ team is having some serious difficulties, but in the Champions League they are doing a little bit better. The Croatian tactician is getting a lot of criticism for the way the team performs in the Bundesliga. If Bayern continue like this, Kovac will have some serious problems.

In their previous game in the group Bayern enjoyed a terrific 5-1 win over Benfica at the Allianz Arena. Arjen Robben and Robert Lewandowski scored braces for FC Hollywood, while Franck Ribery also added one goal for the win.

That’s what we had to say in our winning soccer predictions for the Champions League clash between Ajax and Bayern Munich.