Fortuna Dusseldorf faces Borussia Dortmund in a match from the 16th round of the German Bundesliga. Let’s examine this clash in our winning soccer predictions for today. 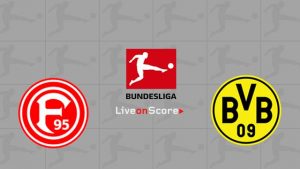 For Fortuna Dusseldorf this is a difficult season so far. The newcomers are currently 16th in the standings with 12 points won, being positioned at the relegation playoff spot. Fortuna’s record so far shows 3 wins, 3 draws and 9 defeats. In their last five matches they won twice, lost twice and made one draw.

For Fortuna their last fixture was a successful one. Friedhelm Funkel’s boys achieved a precious 2-0 win against Freiburg at home. Both goals at the Merkur Spiel-Arena were scored after the halftime break and both of them were scored by the Turkish defender Kaan Ayhan.

For Fortuna Dusseldorf it’s very important that they managed to achieve two wins in their last five games. These 6 points helped them to go up in the standings and escape the relegation zone.

Borussia Dortmund on the other hand are leading the standings with a very convincing performance since the start of the season. Right now Lucien Favre’s team is 1st in the table with 39 points, having 9 points advantage in front of Borussia M’gladbach and the champion Bayern Munich. In its last five games Dortmund achieved five wins.

In their previous fixture Borussia Dortmund enjoyed a 2-1 win at home against Werder Bremen at the Signal Iduna Park. Paco Alcacer and Marco Reus gave the home side a good advantage in the result. Max Kruse returned one goal for Werder, but the visitors were unable to turn the game around. It’s very difficult to take something from Dortmund nowdays, they are playing very good.

These are our winning soccer predictions for the Bundesliga fixture between Fortuna Dusseldorf and Borussia Dortmund on Tuesday night.